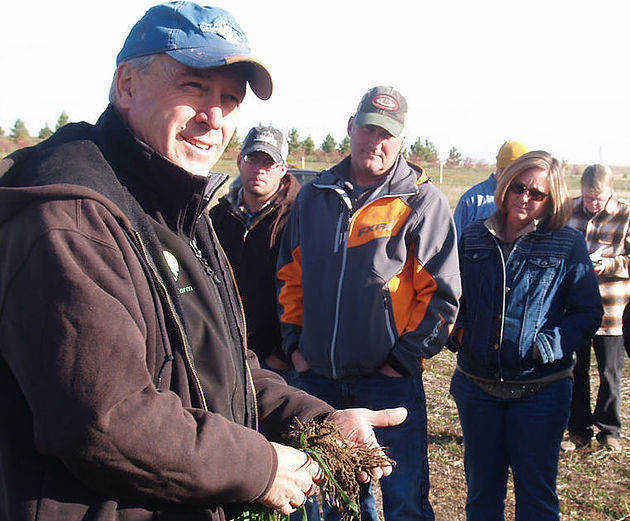 “I used to think cover crops were important, but now I think they are essential,” Fuhrer said.

When production agriculture began, “We converted our grasslands from 50-100 species per acre of perennials into a single annual crop.”

These diverse species of plants had a lot of root exudates, which provided food to the soil food web.

Then came long fallow periods, which were in the spring before planting, and another long period of fallow followed after harvest in the fall.

“What I tried to do with cover crops was find a fit to fill in the fallow  time periods ,” Fuhrer said.

There are agronomic and economic reasons to planting cover crops.

Keeping a cover on the soil all year long and using a diverse range of plants benefits the soil in numerous ways.

Fuhrer brought up a shovelful of soil, and showed where the soil aggregates were.

“This is just like Christmas when you put your shovel in the ground,” Fuhrer said. “This is really exciting stuff – these are soil aggregates.”

He found the root mass coated with soil aggregates and fastened together with “glue (glomalin)”.

“This is the start of infiltration. If you want to improve infiltration in your soil, this is where it starts,” he said. “You have to have pore spaces because water has a tendency to run off. That inch of rain you got – you want to keep it all and pore spaces do that.”

Who puts soil aggregates in the soil? The soil food web.

What are they going to use as a food source? Green plants produce  the food source.

“If we’re going to take carbon dioxide out of the atmosphere into the stomata of the plant, this plant, in turn, is going to give off carbon sugars into the soil as the primary food. When you think carbon, always think food. All of sudden, we have all this activity going on right by the root mass,” he said.

In a part of the soil Fuhrer had dug up, he pointed to macropores.

Who is going to build those macropores?

Tap roots (such as  radish or sunflower) are one method of building macropores. They are often part of a cover crop mix.

“I also have an earthworm here. Why was he here in this root mass? Food. That’s where the food is,” he said.

Fuhrer said there was a combination of pore spaces (micropores) and macropores in the soil he had dug up from under the cover crops.

“All of a sudden, we have real infiltration and we can begin to build that infiltration,” he said.

However, after farming 100 years in the soil, horizontal compaction layers result.

To put the pore space back in, there needs to be a green plant.

“You can’t go to WalMart and buy a pore space. You need to have a green plant,” he said.

Green plants can harvest CO2 out of the atmosphere, and bring it into the plant. The plant is 42 percent carbon, so it takes a lot of carbon to build a plant below ground and above ground.

Sometimes, Fuhrer said he drives by a field, and he sees  it has been harvested.

“And that’s great. Agriculture is an extraction business: some of this crop will go to energy, some to food, some for livestock feed – but it all goes somewhere,” he said.

But in some of those fields, there is little to no residue , left. And that means potential for erosion and lost carbon.

“As long as the above-ground residue is left in place, there is a greater chance of preventing erosion and carbon loss,” Fuhrer said,

Soil erosion is not completely laid to rest in 2017 in many areas of the state.

“If we continue to plant large acres to low-residue crops like soybeans, even with no-till,  what is that going to do to our soil?” he said. Soybean is a great crop, but needs additional soil protection.

If soybeans can be planted green, that can work to control soil erosion. This practice refers to no-till planting primary crops into actively growing cover crops. This practice can be used when planting a crop such soybeans into a cover crop.

Salinity is a good reason to plant cover crops.

Recently, some 65 farmers showed up in one North Dakota town to listen to a salinity workshop – that is how much interest there was in the subject.

“The salinity is significant in some areas,” he said “If we grow out our water through plants, instead of soil evaporation with tillage, it will help control salinity.”

Rye and barley are good salt-tolerant plants, while alfalfa can be used to harvest out large quantities of water.

In the Northern Plains where there are cold, wet springs, with a limited growing season, it is important to plant “green” and a fall rye cover crop plays a part in that.

In terms of water quality, that green plant will absorb inorganic nutrients.

“Plant green: bring a cover to that land,” he said.

Soil organic matter has a carbon to nitrogen ratio. The C:N ratio is important due to the fact that it has a direct impact on residue decomposition and nitrogen cycling in our soils.

He explained the C:N ratio of soil is about 10 to 1. Cover crops help because there will usually be more than one crop planted, some with high C:N ratios and some with low.

“A year ago, the Menoken Farm near Bismarck, grazed a field of corn that was just starting to make cobs. It was fun to watch the heifers grazing the corn. How they looked in May compared to how they look by fall was amazing. They looked great,” he said. “The beauty of livestock is their ability to recycle nutrients, especially carbon.”

Maintaining body condition of cows is important and cover crops can play a role.

The DREC ranch near Manning, N.D., has been doing this for many years, using both grazing corn and cover crops to improve soil and the condition of cattle.

Nutrient export is a huge item that everyone will face as agriculture continues in the future.

When crops are grown and exported, thousands of pounds of nutrient leave the state every year that never comes back.

“That is why I like grazing   livestock in the field,” he added.

“If we are truly going to address salinity, erosion, and lack of diversity in North Dakota, we need to think about introducing cover crops into the system,” Fuhrer said.

When a cover crop is brought into a field that never had a cover crop, there is going to be an adjustment.

“When we bring in a cover crop, that is a game changer. All of a sudden we see a carbon spike, and that is a food spike,” he said. “The goal is more root mass with soil aggregates; and ultimately more carbon.”